The Corona crisis has caused many things to be reassessed. The regional aspect has benefited in particular. Lean global supply chains continue to exist, but supplier proximity has become increasingly important. Long before Corona, EVVA was already focusing on a high level of added value and regionality, because

All these benefits can compensate for, or at least cushion, the higher costs of regional procurement channels. A high proportion of EVVA's suppliers from the region therefore has an impact on the economy, the environment and society. Stakeholders have therefore rated "the proportion of regional suppliers" as essential for EVVA. As practically all materials and product components for the international EVVA Group are purchased through the headquarters in Vienna, EVVA defines suppliers within a radius of 1.000 km as regional sources in the current reporting period. That’s why we talk about "regional" suppliers rather than "local" ones. More on that in the target below.

EVVA purchasing at its headquarters (including the main production facility), where the group of companies generates approx. 75% of the total production value added, has newly analysed its regional proximity of suppliers: 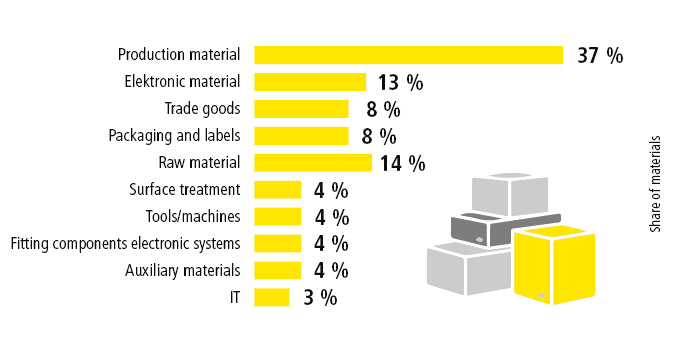 Supplier share of the total purchase turnover by region

As the above list shows, EVVA cannot obtain all the parts required for production from regional sources. A few components need to be procured from suppliers from other continents. This is because there are practically no local suppliers for certain product categories (such as hardware parts for electronic systems), and if there are, they offer products at very high and uncompetitive prices. For certain components, there are generally only a few suppliers on the world market. EVVA has therefore intensively analysed its single sources in recent years. For more information, see Security of supply.

Our targets
Increase the number of regional suppliers to 95%

How: This target was adapted in 2021 because the EVVA definition of "regional suppliers" has also changed. So far, only Austrian suppliers have been designated as regional. The original target was to increase their share of purchasing sales from 50% to 60% by 2023. In the reporting period, EVVA reassessed the regionality and defined suppliers within a radius of 1000 km from the Vienna headquarters as regional. There are two reasons for the redefinition: On the one hand, in the sense of a “Europe of the Regions”, with which the EU would like to support regional self-reliance. With regard to CO² emissions, a supplier from nearby Bratislava is no less regional than a supplier from the more distant Austrian Vorarlberg. On the other hand, because many of the essential material manufacturers for EVVA, with whom we have maintained very close business relationships for decades, come from Central and Eastern Europe. With the help of these regional supply chains, we aim to keep 95% of our purchasing turnover within the 1000 km radius by 2023. We are currently at 93%.

We want to achieve this target, for example by no longer procuring key heads or electronic components such as motherboards from overseas.

Positive effects: According to calculations by EVVA's Logistics & Purchasing department, 1 million euros of EVVA's purchasing turnover remain in the region, helping to secure or expand supplier jobs. Due to the shorter transport distances (less air freight from Asia) around 25 tonnes of CO² are being saved.