External certifications and awards confirm how important reliability and sustainable actions are to a company. For many customers, such as building operators, these serve as a decision criterion when awarding contracts. The certificates all attest to the very high quality, reliability and user safety of EVVA's products and machines. In addition to valuable external know-how, certifications also give us the guarantee of always being up to date and of being one of the best. 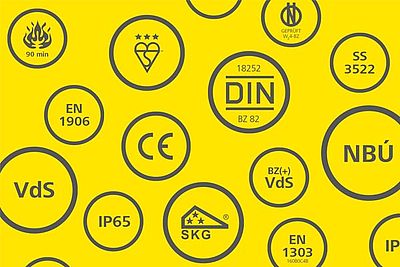 EPDs are voluntary environmental declarations for individual building products to indicate the eco-balance of buildings. They include data on energy/resource consumption during the product life cycle. EPDs are a decision criterion in the construction of so-called green buildings, which must meet strict specifications. In the security industry, there are EPDs for all building hardware (e.g. lock cylinders). EVVA has already been able to win many green building projects with its EPDs, including the Prime Tower in Zurich and the Austro Tower in Vienna.

A selection of EVVA's sustainability awards: